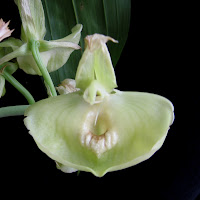 Catasetinae are an odd group of orchids. Unlike most other orchids, they often have either male or female flowers depending on growing conditions, although sometimes the flowers are hermaphroditic. If this sounds confusing, it is.

Right now I have a Catasetum expansum that’s in full bloom with large, shiny, light green flowers. I didn’t realize at first that they were fragrant, but quickly discovered that they smell just like spearmint with a little touch of anise. It’s the coolest, freshest orchid scent that I’ve ever smelled. It could be a toothpaste or chewing gum. Not really perfume material, but interesting nonetheless. 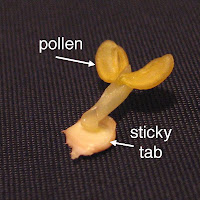 The flowers on my plant are male. When I touched one of them on the little spring-loaded trigger right over the lip, the pollinia shot out at high speed, as if from a gun, even making a little explosive sound. The two pollinia are attached to a tiny white tab with a dot of sticky stuff at the base. They stuck to my hand, just as they would stick to an insect’s back for transport to a female flower that actually offers a sip of nectar, not just a slap on the back.

I’m not sure what kind of insect finds spearmint attractive, but there must be one.
Posted by Doc Elly at 3:40 PM