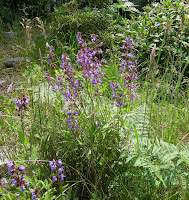 What would turkey stuffing be without sage? I started thinking about this herb during the preparations for Thanksgiving dinner when it was revealed that the person who was hosting the dinner didn’t have any sage in the house or garden, so the family member doing the cooking sent her out to the neighbor’s to get some.

The kinds of sage we are most familiar with are only a few of the many hundreds of species in the genus Salvia, which grow worldwide. Salvia is in the mint family, so it’s not surprising that at least some species have aromatic leaves. 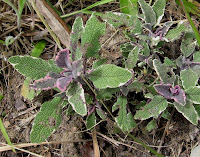 The kind of sage that grows in the garden and is an obligatory ingredient in turkey stuffing is Salvia officinalis, also known as Dalmatian sage, a bushy herb native to the Mediterranean. It’s a pretty plant, especially the variegated leaf type, and grows well in the Pacific Northwest. The cute little plant in the photo has long since become a big, woody thing. The purple flowers are attractive not just to look at, but to bees, too. The essential oil of Dalmatian sage has a mild, aromatic, slightly dusty, earthy, musky and salty scent, more or less like crushed fresh sage leaves. I haven’t used it in any of my perfumes yet, but definitely need to experiment with it. 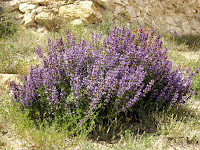 Spanish sage, Salvia lavandulifolia, is similar to the common garden variety, but with narrower leaves. The essential oil smells like a stronger, more camphorous version of officinalis. I think it would be a wonderful addition to a perfume instead of lavender, which I’m not really crazy about in perfume, at least as a prominent note. 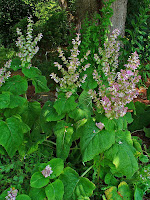 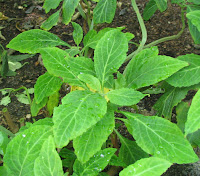 A discussion of Salvia would not be complete without mentioning Salvia divinorum, a Central American species that is supposed to have psychoactive properties. I have to say that I was not impressed by any of its properties. It looks like a weed, it isn’t very aromatic, and as far as I know there’s no essential oil extracted from it, although there are websites that sell all sorts of other, presumably aqueous, extracts. Even if there was an essential oil, I doubt that it would be useful as a perfume material.

Sagebrush is not sage at all, but a type of Artemesia, but that’s a topic for another post.

My favorite culinary use for sage is to cook a batch of tortellini, chop a bunch of fresh sage leaves, sauté them in butter, add crème fraiche, salt, and pepper, and sprinkle the whole thing with a little freshly grated Parmesan cheese. Delicious!

[Photos of Salvia lavandulifolia, sclarea, and divinorum from Wikimedia]
Posted by Doc Elly at 12:07 PM