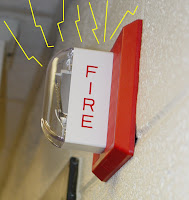 Yesterday evening while I was working in my “day job” lab, all of the fire alarms in the building went off. The people I was working with carried on with what they were doing while I went to investigate. This may sound blasé, but out of all the numerous times I’ve experienced fire alarms, I have yet to experience an actual fire or other emergency associated with them. The one time I did experience an accidental fire, no alarms or emergency responses were involved, but that's a story for another day. Fire alarms in public buildings seem to malfunction on a regular basis, so no one takes them seriously.

After the alarms sounded, I had to leave the building to find out what was going on since everyone had been ordered outside. It looked like a dire emergency since there were two enormous fire trucks parked at the entrance, at least a half dozen police cars and vans, and a crowd of several dozen firefighters, emergency medical personnel, university security people and police officers running around. There was even a police dog on a leash, sniffing the ground.

At first no one seemed to know what was going on, but as I located and talked to the protagonists, the story slowly emerged. It turns out that someone had called the department main office manager complaining about an “odor” in one of the shared work spaces. He checked the space in question and didn’t smell anything, but called building maintenance anyway to report it, making it clear that it was not an emergency. Shortly thereafter the alarms went off and the massive turnout of fire and police crews appeared on the scene, ordering everyone who was visible to them evacuate the building. The group of students standing behind me on the sidewalk speculated that the odor was from a corn dog that one student had been eating, and/or the farts that followed its consumption. It’s as good an explanation as any and serves to highlight the absurdity of the reaction. 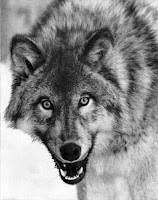 This grotesque overreaction to the report of an “odor” highlights the US obsession with “safety” and the paradox created by overreacting to vanishingly small possibilities of harm for fear of legal repercussions. Another good example of this phenomenon is a tsunami siren that is sounded every day in a coastal town near here. The alarm is sounded to “test” it, but clearly everyone in the town has learned to completely ignore it, so if there actually were a tsunami on the way, everyone would continue going about their usual business. We’re surrounded by the wolf cries shrieked out by tsunami alarms, fire alarms, smoke alarms, and other alarms that are constantly being tested, malfunctioning, or sounded in response to trivial, innocuous occurrences. If there ever were a fire, we would have to depend on our noses and our common sense to alert us that we need to get out of the building.

I can well imagine that the next time the fire alarm goes off in our building, it will be because someone complained about an “odor” from a perfume that someone was wearing, and the complaint got transmitted to 911. That makes about as much sense as a corn dog, and maybe a better story.