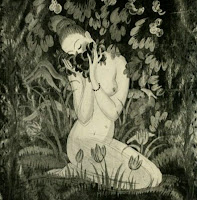 I keep a file of notes that I occasionally pull out and look at, so here’s one from the archives. A year or so ago there was a discussion of aromatherapy on Basenotes, in which it was asserted by some that aromatherapy is an effective treatment for various physical ailments. I made some notes at the time because there seems to be a lot of confusion about the use of herbs taken internally, applied locally, and inhaled. I can only conclude that some (obviously not all) of the aromatherapy crowd simply search for the name of a plant along with the term “medicinal uses”, and conclude that inhaling fumes of an essential oil will have the same effect as taking the substance internally or applying a poultice, cream, or salve to the skin. Granted, there are some herbs that can be smoked or otherwise absorbed through mucus membranes, but it’s not always the case that one route of administration is as good as another. There’s also the issue of dose. 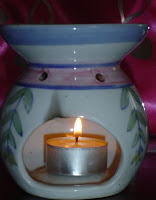 Because aromatherapy is such a popular theme, cutting across many segments of the fragrance world all the way from conscientious, well-educated, bona fide natural medicine practitioners and natural perfumers to commercial candle manufacturers out to make a few bucks with a synthetic fragrance-oil-scented petroleum product with the word “aromatherapy” stamped on the label, it seems reasonable to take a critical look at what aromatherapy can and cannot do. This post is an expansion and revision of what I wrote in response to one of the posts on Basenotes.

I think everyone would agree that odors have profound effects on behavior since they provide signals for behaviorally relevant stimuli. We are attracted to the smell of a bakery or other source of food, just as any other living organism is. When we smell something rotten we feel compelled to find the source of the odor and clean it up or avoid it. Certainly no one would dispute the fact that odors can affect mood and produce conditioned responses. When I smell my dark roast coffee brewing in the morning, it never fails to induce a good mood and start waking me up even before I taste it. If I smell dog feces left in our front garden by the neighbor’s dog, it induces a bad mood and makes me heap curses on both the dog and the neighbor. Smelling perfumes almost always cheers me up, and there are some perfumes that I keep around just to smell rather than wear.

The oft-repeated assertion that aromatherapy "works" is based on the universal observation that people generally feel better when they have pleasant odors to smell. This effect is undoubtedly due to subtle changes in brain state and neurotransmitter levels, so it is a real physiological phenomenon. Odor can act as a distraction so that attention is shifted away from a painful or unpleasant sensation, be it physical or psychological. The feeling of well-being induced by pleasant odors can have physiological effects such as lowered blood pressure, deeper breathing, muscle relaxation, and changes in patterns of brain activity. These uses of odors are all scientifically valid, and are not the same as claiming that odors can directly treat or cure specific diseases or conditions. A general lack of rigor when talking about aromatherapy is what sometimes makes it seem like a dubious snake-oil marketing industry instead of an art and science that potentially benefits us all.

What is your experience with aromatherapy?

[All images from Wikimedia]
Posted by Doc Elly at 8:44 AM