MORE ON ARTEMISIA: ABSINTHE AND ARMOISE

In my quest to explore Artemisia species, I ordered some Artemisia absinthium oil. The vendor also had Cymbopogon validus, also known as African bluegrass, so I’m testing the two of them in parallel. I’ll be writing about the African bluegrass in another post on Cymbopogon species used in perfumery and cooking. However, I also realized that I have essential oil of yet another Artemisia species, Artemisia vulgaris, also known as armoise, wormwood, or mugwort, so will compare it with the newly-acquired absinthe. 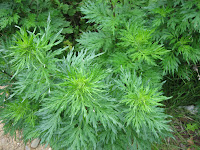 Armoise has a dry, slightly bitter, slightly sweet scent that reminds me of sage, tarragon, and aromatic greenness. I used it in Kingston Ferry to help produce the salty, leathery-leaved, herbal green scent of the gardens and beach areas near the ferry dock. It would be a wonderful addition to any perfume that has a strong herbal note. 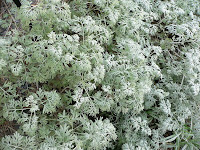 Absinthe essential oil is stronger and more bitter than armoise, dry, woody, and sharp, but with the same tinge of saltiness. It even has a hint of oiliness in the beginning before the bitter, woody character fully develops. It has nothing to do with the typical anise and fennel flavoring used in the drink absinthe, but does presumably contribute a bitter character similar to that found along with other flavorings in vermouth. In perfumery, I can see it contributing to deciduous wood accords like oak.

[Artemesia plant photos from Wikimedia]
Posted by Doc Elly at 11:25 AM