BREAKING NEWS: WATER MAY PREVENT DEHYDRATION! (BUT IT HASN’T BEEN PROVEN) 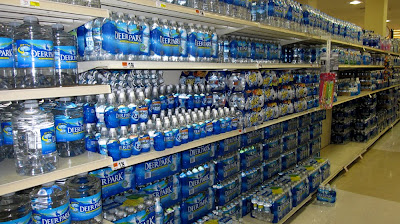 According to this article that Gail turned me onto, there’s a new EU ruling that bans companies that sell bottled water from stating that water helps prevent dehydration. Sheesh. No wonder the EU is in deep trouble.

Let’s start with the least ridiculous part of the story first. Why do companies need to state the obvious? Are people not buying enough water packaged in eco-hostile little plastic throwaway bottles? After all, the bottled water manufacturers don’t manufacture water, they just manufacture bottles (or buy them cheaply) so that people can drink a few sips from them, throw them away, and buy still more plastic bottles. The more bottles that are sold and thrown away, the more that sector of the economy grows. How about spending all of that money on providing clean, drinkable water to municipal water supplies everywhere so that people don't have to buy bottled drinking water?

Do people really not know that drinking water in its pure form or mixed with various flavorings will keep them from getting dehydrated? I can see the lawsuit now: Some idiot didn’t know that he needed water, because no one ever told him, so he never drank any liquids and died of dehydration. His family then sued the bottled water company for not publicizing the fact that drinking water from time to time is a good thing.

After participating for a short time on a US running forum where 90% of the discussion was on losing weight and “staying hydrated”, I had to conclude that people in today’s society don’t have sense enough to stop eating when they’re full, or to drink when they’re thirsty. It’s sad.

Anyway, on to the second half of the story, which is the EU’s decision to ban water sellers from stating that, “regular consumption of significant amounts of water can reduce the risk of development of dehydration”. Yes, that is the exact wording as given in the article. The company doesn’t even come out and actually say that water prevents dehydration, let alone “cures” it, they beat around the bush like the cosmetics companies that state that their product “if used regularly may help reduce the appearance of wrinkles”, or my favorite from many years ago, a company that stated in a print ad that its product had “totally nugatory effects”.

Now for the best part of all: After a three (yes, 3!)-year investigation, the EU determined that the statement could not be scientifically proven, and banned water bottlers from making any claims about water reducing the risk of developing dehydration, under threat of two years imprisonment. I wonder how much the investigation cost the Brussels administration and the EU as a community? Did someone actually search the scientific literature for studies “proving” the obvious? Do we need formal studies to tell us that eating food reduces the risk of starvation, or that breathing air reduces the risk of suffocation? Or that using common sense reduces the risk of engaging in stupid behavior? 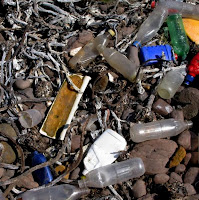 If this incident had been on a comedy show, I would have laughed and dismissed it as an over-the-top joke. As it was, I had to search for other related news stories to confirm it and make sure that the date line was not April Fools Day. Apparently it’s true, although I still have nagging doubts, so I can only shake my head in wonderment about the absurdity of the whole incident and conclude that when one form of stupidity encounters another, they mate and produce an exponential increase in stupidity all around. Even if the story’s a hoax, the tendency of stupidity to reproduce exponentially still provides a good sociological model.

[Bottled water before and after pictures from Wikimedia]
Posted by Doc Elly at 10:36 AM