THE ROAD TO NO NONSENSE PERFUMES PART 1

Sometimes a post on another blog really gets me going. This morning it was Marla’s satire on Mirabella the Cat and the accompanying discussion of what induces one to actually buy a bottle of perfume. I started responding to it in the comments section and halfway through realized that I had practically written a whole blog post. 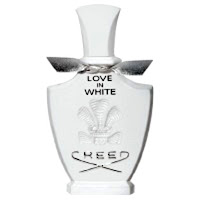 I was particularly sensitized to the issue of nonsensical hype because I recently sampled Creed Love in White, which epitomizes ridiculous advertising. In fact, it can practically hold its own with Mirabella the Cat and her special demographic. First, the facts about the fragrance (Creed, not Mirabella): Love in White starts out as jasmine surrounded by aquatic and “manly”-spicy notes. As it evolves, the jasmine shares the stage with generic florals and harsh, synthetic woody notes, giving the whole composition the aura of a functional scent for a shampoo amped up to 80s proportions, with tremendous sillage and skin-bonding tenacity.

Now for the hype: Apparently a number of celebrities wear Love in White. Who cares which celebrity wears a perfume? Their taste is not mine. Why is it that all of the perfumes reported to be favorites of celebrities (or at least owned by celebrities) are overpoweringly filled with floral notes, especially jasmine? Are they meant to be used as repellants to keep the paparazzi at a distance? I suppose the target demographic is celebrity wannabes, who are probably as numerous at department store perfume counters as cats are in the alleys of Naso Asqueroso, Baja California, where, according to the buzz, Mirabella spends her winter vacations.

Celebrities aside, the promotion of Love in White is further degraded by all the circulating hype about Oliver Creed traveling the world for 5 years in his yacht searching for the stuff that went into this fragrance. In all fairness, this overblown version of the story seems to be an urban legend fabricated by the retailers who sell Creed, since the Creed website itself simply mentions a love of sailing and materials from five continents. Good for Mr Creed that he can afford a yacht and have the leisure time to travel on it, but I don’t understand why department stores and other perfume outlets think they can sell the product by making it sound as if he got off his yacht in thousands of exotic locales, saw exotic plants growing in the jungle or on the beach, extended his magical hand and said “Let there be essential oil, tincture, or absolute” and there was essential oil, tincture, or absolute. I would be willing to bet that an employee of the Creed company ordered all of the materials used in Love in White from a wholesaler or bulk producer the same way I order my materials. I also use materials from 5 continents, as does just about any other perfumer who uses naturals. There’s nothing special about it. The difference is that Creed can order in mass quantities, so the same materials end up being much cheaper for him than they are for me or any other indie perfumer. Personally, I don’t want to subsidize the purchase and operation of other people’s yachts through my perfume purchases.

I guess the point is that what a perfumer or their advertising staff says can be completely ridiculous to begin with, or it can start out just mildly off-putting and become distorted by the retailers and the media as it is repeated over and over again, eventually becoming thoroughly ridiculous.

Wow! I really went off on a tangent about Creed and their retailers, and didn’t get to the main point about my evolving quest to make and market top quality no-nonsense perfumes at no-nonsense prices. That will be Part 2 of what is quickly becoming a series. Stay tuned.
Posted by Doc Elly at 1:27 PM