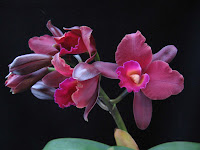 It’s just a coincidence, but imagine waking up on Christmas morning to find that three of your biggest orchids have burst into bloom overnight, and one of your smallest. Well, that’s what happened in my greenhouse. The red cattleya of perfume fame has been pumping its buds full of juice, dripping sugar, and gearing up to go for a couple of weeks now. Today three of its eight buds are suddenly open, and the others will be open by the end of the day. Last year it had seven flowers, this year it has eight. The plant and flower stalk are almost three feet (1 m) tall. 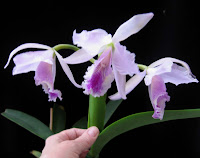 The other big cattleya that opened its buds last night is Cattleya labiata, a species that I raised from a tiny seedling. This is its first bloom, with just three flowers, but they’re full-sized with lavender petals and a frilly, striped, “landing-strip” lip. I included my hand on the flower stalk to give an idea of the size of these standard cattleya flowers. Neither of the cattleyas has started to produce fragrance yet, but I’m looking forward to enjoying the real red cattleya again and finding out what labiata smells like. 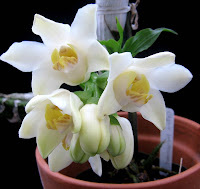 Chysis bractescens opened its buds, too, revealing its fleshy, creamy white flowers with a yellow lip. These flowers are already starting to produce their gourmand bourbon vanilla- with narcissus scent. 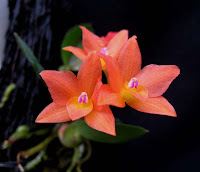 The fourth orchid that opened its buds overnight is Sophronitis cernua, a miniature mounted plant that I am displaying in the house hanging on the pot of the Cattleya labiata. It has two clusters of three flowers each, the brilliant red-orange flowers contrasting perfectly with the green leaves. Unfortunately, these flowers have no fragrance. 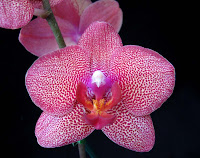 The solstice is a prime time for some orchids to bloom. Phalaenopsis are mostly winter bloomers. Right now one of my favorite hybrid phals is in bloom, Brother Yew x Carmela’s Spots. I generally don’t like hybrid phals, but this one is a cream color with so many tiny maroon stipples all over that it looks solid maroon color from a distance. Its lip is a deep maroon. The reason why it’s my favorite hybrid is because it’s strongly fragrant, with a rich, citrusy, floral-perfumey scent that it dispenses in large quantities during the day. 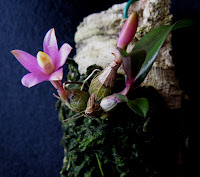 Also blooming are Phalaenopsis amabilis,with solid white flowers, Phragmipedium bessae, another orchid with brilliant orange-red flowers, Dendrobium laevifolium, a mini with red-purple flowers, and Dendrobium hercoglossum, a midsize plant with a multitude of lavender-pink flowers. This last one doesn’t really count, since it blooms all the time, but the number of flowers does peak around the solstice.