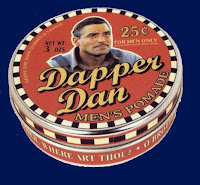 Ideas for perfumes come from the oddest places. Are you old enough to remember the film “O Brother Where Art Thou”? Remember George Clooney’s character and his fictitious “hair treatment”, Dapper Dan? Well, I just discovered what Dapper Dan smelled like!

My husband’s hair is thinning, and somewhere I read that spikenard is used in Tibet to promote hair growth. Maybe it’s just folklore, but a man losing his hair will try anything. Isn’t that what snake oil was for? OK, maybe snake oil had some other applications too, but when everything else is in good shape, a man worries about his hair. Following in the footsteps of Maslow, I’ve formulated Doc Elly’s hierarchy of male vanity concerns. Hair is right up there near the top of the external appearance level.

I did a little research on herbal hair remedies, and came up with a mix of essential oils that may or may not have an effect on hair growth, but at least they smell good and produce a strong placebo effect. The current version of the preparation includes spikenard, lavender, rosemary, and sage in a coconut oil carrier. This morning I was lying in bed inhaling the lingering scent of the mix on the pillows and thought, “Dapper Dan! That’s what Dapper Dan smelled like!”.

OK, you guessed it. Now I’m fantasizing about making a perfume called “Dapper Dan”. It’s going to have lots of aromatic herbs and rooty things that together produce a slightly sweet-smelling combination. With luck it will be an all-natural composition. Of course it would have to be a solid perfume so that it can do double duty as a “pomade”. I’ve never made a solid perfume before, so that would be a new adventure. Now I need some good 48-hour days and a bigger notebook for all my briefs to myself … George Clooney did have nice hair, though …

[As far as I recall, the Dapper Dan can is from Wikimedia]
Posted by Doc Elly at 9:14 AM