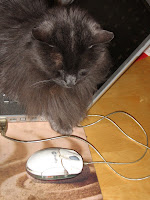 We are lucky enough to have a cat that consents to grace our household with his presence and let us be his servants. He’s of unknown age, but at least 14 years old, having come to us of his own accord as an adult. He’s of unknown breed, although the closest guess would be a long-haired Russian blue. In the winter his coat is so long and thick that it hangs down almost to his feet and includes a lion-like mane around his neck. In summer, he loses most of it and becomes a sleek short-hair. At all times his hair is so thick and downy at the base that his skin cannot be seen and he’s completely protected from rain, which slides right off the top layer of his fur. Watching this cat’s coat adapt to the seasons is fascinating as is watching him climb trees, gallop through the tall weeds and grass, and hunt, catch, and eat small animals. He’s an indoor-outdoor cat, completely independent through use of his cat door, and perfectly able to take care of himself if we go away for a week or so. 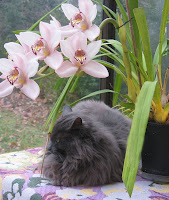 Indoors, he’s unusually well-behaved, never scratching anything, never jumping on the kitchen counters, or doing any of the other unpleasant things cats often do. He walks carefully among plants and perfume bottles, and has never damaged either. Mostly he politely ignores perfume smells, but did become intensely excited the first time I opened a bottle of synthetic civet, running around the house at breakneck speed as if he were searching for the animal producing the smell. He reacted this way to civet a few times, but seems to have gradually gotten used to it, especially since over the years my perfume-making area has taken on a characteristic base scent of its own that includes a civet note. I think it’s due to small amounts of scent being absorbed by the plastic drawer storage units that I use for raw materials.

If I’m working on perfume, the cat will often come to the door and meow at me. I’m not sure if he likes or dislikes the scents I’m setting free to float around in the air, or if he just thinks I’m invading “his” space, since he sometimes likes to hang out in that room. I think he’s gotten used to smelling something different every day and, if it gets to be too much for him, he can go outside and sniff the fresh air and the multitude of cat-friendly scents that an acre of mostly forested land offers his little gray nose. 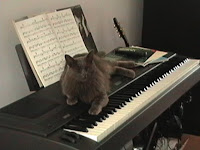 His only vices, if you can call them vices, are getting on the keyboard whenever anyone is playing and attempting to play along. Once he’s been shooed off the keys, he’ll sit on the back part of the keyboard and enjoy the music. He also likes to get on our laptop keyboards if we’re typing, and he’s been known to add to documents and even send e-mails to people. This post was inspired by the photo at the top, in which I found him sleeping on my laptop keyboard (granted, it was probably a warm place), reaching his paw out for the mouse.

Do you have pets? What do they think of your perfumes?
Posted by Doc Elly at 11:11 AM