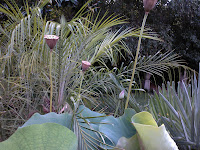 I’m back from my trip to Memphis, where I thoroughly enjoyed warming up in the tropical, humid heat whenever I got a chance to be outside, and meeting a lot of new and interesting people. The photo shows water lilies (Nelumbo nucifera) growing in big tubs in Memphis, making me think that I could have them in the garden here. These only had seed pods and buds, so I didn't get to smell the flowers. I was welcomed back to Seattle with a shocking blast of cold air, even colder than the air conditioning in the cave-like buildings of Memphis. At least the sun’s out today and has warmed things up.

Speaking of sun, there’s a super-sunny hot spot in the sun porch where even the most heat-loving orchids won’t grow, so I’ve populated it with various succulents, including some cacti. I’ve grown a few cacti at other times in my life, but they never bloomed. This year, however, I’ve had three in bloom, and they’re a delight to see, with big, colorful flowers that are nothing like orchids. The down side is that the buds tend to sulk and only open when they feel like it, usually for only a few hours on sunny mornings, so I feel incredibly lucky if I catch them in the act. Also, none of them have any fragrance as far as I can tell.

I’ve managed to get photos of two of them, but the third one, a Mammillaria  guelzowiana, bloomed while I was in San Francisco. The last of the flowers were open the night I got back, but it was too dark to take a photo, and they were closed forever by the next morning. It’s too bad because the flowers were huge, and a spectacular hot pink. 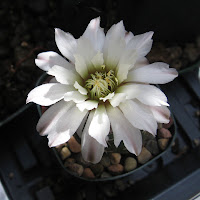 For the past two weeks there has been an open flower on the Gymnocalyceum rogonesii, white, but still beautiful. It opens every morning and closes at night, so it provides plenty of photo-ops. The flowers are almost bigger than the plant, so the little squatty cactus is hidden under its flower. I was really surprised to see that it was still in bloom and opening in the mornings after I got back from Memphis. It’s finished now, but it had a long run. 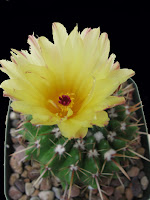 There’s a yellow Notocactus mammulosus that has bloomed twice now. The flowers don’t stay open long, but they sure do their job.  Each time they’ve bloomed, they've made seedpods, and I even have babies growing from last year’s seeds.

Seeing these gorgeous, colorful flowers on the cacti can brighten up even the most dark and depressing morning, and enhance a beautiful sunny one like today. Does anyone know which cactus flowers are fragrant?
Posted by Doc Elly at 11:57 AM