Where to start with a report on San Francisco? I suppose I could start at the end and tell you that I’ve been feeling terrible since I got back, sleeping a lot, and not getting much done. This means that I’m even more behind on shipping out orders and posting here than I would otherwise be. Little by little I’m feeling better and trying to get caught up.

It would make the most sense to begin at the beginning, with our arrival at the Hotel Abigail aka America’s Best Value Inn on Friday night. In terms of location and price we couldn’t have done better. It was located at the border between the Civic Center and Tenderloin districts, right next to the law school. It was only a few blocks from Market Street and a BART stop, and was within easy walking distance of all of the event venues. It was an old building from the 1920s, partially renovated and reasonably clean, and before we left they even got the ancient steam radiators working to take the chill off the cold San Francisco summer! The hotel had just changed owners and the staff were not the most competent, but you can’t have everything.

On Saturday morning I attended the “Supplier’s Breakfast”. Here’s a photo of (left to right) Lisa Fong (Artemisia Natural Perfume), yours truly, Alyssa Harad (Author of Coming to my Senses: A Story of Perfume) and Roxanna Villa (Roxanna Illuminated Perfume) at the Wichcraft Café (‘wich being short for sandwich, not a misspelled sorceress, but it seemed appropriate anyway). The breakfast was sponsored by Fragrance West, a company whose business is making large quantities of perfume concentrate based on clients’ formulas or briefs. It seems that some “artisan” perfumers have gone this route, in whole or in part, especially those who sell to distributors in Europe or other places where everything has to be certified IFRA-compliant. I have mixed feelings about this approach, especially given that making the concentrate is only one part of mass production. A more labor-intensive part (if you do it yourself) is bottling and packaging.

I suppose the major advantage of this approach is that one has an official “kosher for IFRA” certificate, but I’m not to the point where I want to sell thousands of bottles to European department stores. I don’t know that I ever will be. What I do know is that if I were producing for the mass market through a third party, especially one that was doing the formulating, I would no longer be an “artisan perfumer”, I would be a perfume company CEO. The question of what to farm out and what to do oneself is an ongoing topic for contemplation. Right now I do literally everything myself, but wouldn’t mind delegating some routine tasks like sample-making to a part-time employee. Beyond that … I don’t know. 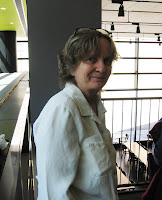 Overall, the breakfast was a great opportunity to meet many of the participants in the Salon, as well as others who were there. One of the highlights for me was getting to meet Linda Andrews, of the Perfumer’s Apprentice, who is one of the only suppliers of aroma chemicals in small (less than 1 kg) amounts. I have bought a lot of things from Linda over the years, and it was wonderful to get to talk to her and have a face to put with the name. She’s one of my perfumery heroes because her work makes indie perfumers’ work possible. Thank you Linda!

I started this post yesterday and abandoned it halfway to take some aspirin, a hot bath and sleep. I’ve been feeling a little better today so got all of my pending orders filled, packed, and ready to go to the post office. All but one. Michael took this person’s payment, name, and address at the show, but didn’t write down what it was that he ordered. Michael’s famous last words were, “I’ll remember”.  Lesson Number One: Write down what people order! 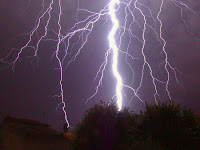 Ever since last night we’ve been having freakish thunderstorms. We almost never have thunderstorms in the Pacific Northwest, but when we do, they go all out with massive amounts of lightning and thunder. This afternoon the lightning was so close that there was no lag between the flash and the boom. Of the half dozen storms that have come through, only two have had rain, one with big hail. It’s mostly lots and lots of lightning. Not a nice welcome back to Seattle.

The next post will continue the report on Saturday’s activities and probably more lessons learned.

[Hotel photo from their website; lightning photo from Wikimedia, other photos mine]
Posted by Doc Elly at 9:22 PM