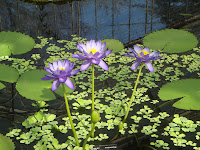 I really haven’t wanted to get into using very expensive natural materials, since I like to keep my creations affordable, but I did go a little way down that rabbit hole in making the Devil Scents and one of my current projects is also leading me farther down that slippery slope to perfumer's hybrid heaven-hell. It’s a formula with a lot of earthy base notes, but I want to use florals as well. I first thought of using tuberose absolute, because it would fit conceptually with the general theme, but when I added it, it clashed horribly. I had just received a sample of osmanthus absolute from Eden Botanical, so on a whim, I tried that with the base. Perfect. Or nearly perfect. It just needed a little sharpening of the floral notes.

There was recently a post about osmanthus on CaFleureBon, giving a lot of its cultural history, so receiving the sample was, if you will, synchronicity doing its work again. Eden Botanical sure knows how to get a perfumer hooked.

Botanically, Osmanthus is a genus of trees or shrubs that are mostly native to Asia, but Osmanthus americanus is a small tree native to the southeastern US, also known as devilwood, due to the fact that its wood is so dense and hard and difficult to cut. Its tiny white flowers are fragrant. I would love to smell them in real life some day. The Asian species Osmanthus fragrans, is the one used in perfumery. The flowers are small, borne in clusters, and yellow to orange in color. I don’t know what the live flowers of either species smell like, but osmanthus absolute is an odd fragrance, diffusely and sweetly floral in the nicest sort of way, like a highly refined version of ylang-ylang, but also with shockingly distinct notes of apricot, green things, and (to me) blue cheese. Others describe it as “leathery”, but to me it’s more cheesy. Maybe it’s just the Eden version that smells that way. Regardless, it goes really well with earthy base notes. Once I get my supply (yes, it’s on order), I’ll do a giveaway of a tiny sample.

Then I had another idea. 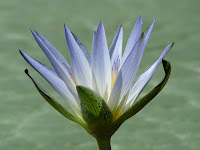 A year or so ago I ordered some oil (aka absolute) of blue lotus, Nymphaea caerulea, from a company in Thailand that grows and produces it. Again, I’ve never smelled the fresh flowers, but I can say that blue lotus absolute has a unique fragrance that’s unlike anything else in the olfactory universe. It’s floral of course, a little sharp and spicy, a little metallic, and quite unlike anything else that I’ve smelled. I was not sure what to think of it the first time I smelled it, but have been saving it all this time. I added it to the base and the osmanthus, and voila! The floral scent popped out in full focus. I’ve got it all on my skin right now, and it’s been going strong all evening. I applied a drop of pure blue lotus in a separate place, and am enjoying it immensely.

Before using blue lotus in a formula, I have to know that I can get more, but the supplier’s website lists it as being “out of stock”. Dang!!! I may have to try some other varieties of lotus to see if they would work, and eventually synthesize an accord that approximates the scent of Nymphaea caerulea, the blue Egyptian lotus. I think it could be really useful. In the meantime, I’ll enjoy the osmanthus and maybe work on synthesizing that, too. 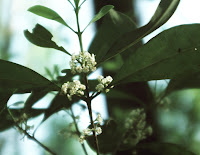 By the way, here's a picture of Osmanthus americanus. Has anyone out there smelled it in real life?

Now that I look at the flowers, I think maybe there's something like that growing on the university campus. I remember smelling some wonderful little flowers on a shrub last winter, and wondering what they were. More research is in order!

[Photos all from Wikimedia]
Posted by Doc Elly at 9:31 AM