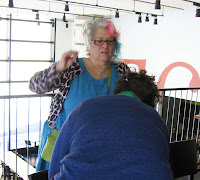 After the breakfast (which was also lunch), the Saturday activities continued with the San Francisco Sniff, organized by Tama Blough (photo, with the colorful hair), who writes for CaFleureBon. Tama had put together swag bags for everyone who participated, so I scored some samples of things I would not otherwise have had a chance to experience, including some by perfumers who were not at the show. The Sniffers gathered first at the Alexander Book Store for a reading by Alyssa Harad, accompanied by sampling of a number of vintage perfumes. I think I was most taken with Jean Patou’s 1000, which I had not smelled in the vintage version before. I have to say that Alyssa’s reading was extremely moving. Everyone was practically in tears by the time she was done. If you like to read books about perfume, you should definitely check it out. 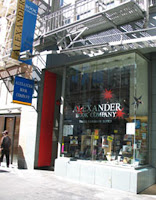 My copy of Alyssa’s book, pre-ordered from Amazon, arrived the same day I got back from SF along with the third book in Naguib Mahfouz’s Cairo Trilogy, which I am compelled to read first to find out what happens to all of the characters that I followed through the first two. A while back I had the good luck of finding the first two books at a local thrift store for next to nothing, but of course the third one was missing. Anyway, I’m halfway through Sugar Street, and will start on Alyssa’s book very soon. By the way, all of the Mahfouz books mention perfume frequently, although the details are mostly left to the imagination. 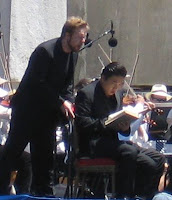 Rather than going to the department stores for the remainder of the Sniff, Michael and I took off on a walkabout and ended up at Yerba Buena Gardens where the Merola Opera Program was performing. It was the only sunny day we experienced while in San Francisco, but it was magnificent, with not a cloud in the sky. Lying on the grass on a cool day with warm sun, listening to a full orchestra and some really good singers – what an afternoon! The big surprise was the second excerpt that they performed, from Boito’s Mephistopheles, the scene where Faust enters into his deal with the Devil, as well as some subsequent scenes featuring our friend Dev – yet another example of synchronicity given that Sunday was the official launch of the DevilScents.

That evening there was a champagne reception and dinner organized and partially sponsored by Yosh Han, who was the primary moving force behind the Salon. I’ve been continually impressed by Yosh’s ability to network like mad and get things done, and when I met her in person it was a pleasure to find that in addition to being highly efficient, she was unpretentious, down-to-earth, and altogether a nice person.

A huge thank-you to Yosh for organizing the Salon !!!

The dinner was at the Press Club, an upscale wine bar. The food we had was excellent, but the portions were so minimal that Michael said he wanted to stop for a burger on the way “home”. We didn’t, but we did compensate the next day by pigging out at the Buckhorn Grill, a fast-food “steak” stand in the Metreon food court.

The Press Club dinner was a wonderful opportunity to meet people and get to know them and their families. I had a great time talking to Shelly Waddington (En Voyage Perfumes, left in photo), Mandy Aftel (Aftelier Perfume, middle, bright purple top) and Lisa Fong (Artemisia Natural Perfume) and their respective husbands (Mandy's husband, Foster, is second from right, in orange shirt). I also enjoyed meeting Ragna Rostad-Ruffner (Divine Life Perfumes, second from left), Brent Leonesio (Smell Bent), Laurie Stern (Velvet and Sweet Pea) … and the list could go on and on. I know this sounds like name-dropping at its worst, but it was exciting to meet so many people that I’d read about or interacted with online, and I’d like to share my impression that they all seem like genuinely nice people. Perfumers, at least the ones I’ve met so far, are not the pretentious creatures that advertising copy writers might want us to believe. How can you be pretentious when you spend your time smelling things?

By the time the evening was over, I felt like I’d made connections with a whole new community of real people, and went to sleep looking forward to Sunday’s show. That report up next!

[Alexander Books photo from their website, group photo at Press Club by Mario Gomez, others mine]
Posted by Doc Elly at 12:57 PM