THE DEVIL SCENTS ARE OUT! 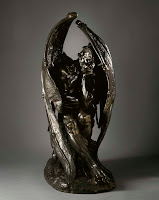 The DevilScents have finally come out of the lab and their lurking in the perfume underground, and emerged on the website. Last night I spent some time putting at least the minimal information on there, which was not an easy task given the rather cumbersome system for uploading photos and other items. They are listed under a new fragrance category, “Special Editions”, since they really don’t fit in any of the others, and at least some of them may be limited editions.

All of them are available in the usual formats, including a 5-ml spray parfum, 15-ml screw-top parfum, 30-ml spray EdP, and a sample pack consisting of 5 x 3-ml spray vials. I had to price them a little higher than the regular line because I used some very expensive natural materials in significant amounts.

For those who missed them before, these are are the full descriptions that I published on the website (more or less):

This is the fragrance of Lilith, the original Eve and wife of the Devil. It is floral and fruity in a green, slightly sinister way, more sharp-edged and intimidating than soft, sweet, or cuddly. It is the enthralling scent of a woman with perfect confidence in her powers, a swirling, almost chameleon-like veil of fragrance that is ethereal and nearly transparent, but still vividly and unquestionably present and compelling. The base includes woody notes, cashmeran, musk, and patchouli; the heart features passion-fruit, angel’s trumpet, lily-of-the-valley, geranium, cyclamen, and a tiny hint of rose.  To provide the special Lilith touch, the top notes are anchored by davana and kewda, topped off with a generous helping of kaffir lime leaf. This is the fragrance of a female warrior who not only fights and wins, but seduces everyone in her path.

THE DEV VARIATIONS
The DEV series is a mandala of 4 fragrances, each a variation on labdanum, which, according to Quantum Demonology, is the characteristic scent of the Devil, affectionately known as Dev. Each variation represents a different phase in the narrative of seduction, passion, destruction, and ultimate circling back to the beginning as recounted in Quantum Demonology, and functions in much the same way as a movement in a musical composition. These four fragrances will be issued as a limited edition series, with the second one, DEV #2 eventually slated to go into permanent production along with LIL. DEV #4 has turned out to be very popular, so it may go into the permanent collection as well. 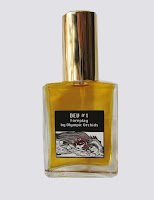 DEV #1: FOREPLAY
The lightest and happiest of the series, it represents the early phase of the story when the female protagonist is being tempted and seduced into a neo-Faustian deal with the devil. It’s the scent of falling in love despite misgivings and against one’s better judgment, a scenario in which bright top notes play against a dark and foreboding base. It contains three kinds of synthetic oud and other woody base notes, black vanilla, tolu balsam, clear labdanum absolute, synthetic musk deer accord, Africa stone tincture, ambergris tincture, synthetic civet, beeswax absolute, frankincense, African bluegrass, giant arborvitae wood from the Pacific Northwest, and cinnamon leaf.

DEV #2: THE MAIN ACT
This smoky, dense, and rich composition is a big, insistent fragrance that represents the romantic phase when the tempestuous love affair between the protagonist and Dev is proceeding in all of its ups and downs. It’s the fundamental seductive scent of Dev, without the darkest and most sinister of the base notes, a spicy, woody, animalic scent that stuns the senses and renders the lover oblivious to any of the horrors and dangers that might lie in wait. It contains three different kinds of labdanum, tolu balsam, black agar, woody base notes, musks, castoreum, civet, cistus oil, incense, immortelle absolute, cade, davana, and the scent of a worn black leather jacket. It’s spiced up with a tiny dab of rose, clove, cardamom, cinnamon, and cinnamon leaf. It combines the spiritual with the carnal in a rising plume of incense accompanied by the riff of a heavy metal bass played by an entity in a black leather jacket. 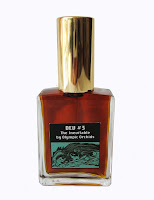 DEV #3: THE INEVITABLE
This muted, dark, melancholy fragrance is made using 100% natural materials. It represents the stage at which all secrets have been revealed, after the inevitable destruction of people, things, and relationships has occurred, when the two lovers recognize that they have to part ways forever. It contains New Caledonian sandalwood absolute, dark labdanum, clear labdanum, red spikenard, a generous dose of ancient fossilized amber, ambergris tincture, black truffle tincture (the fungus, not the chocolate), cistus oil, cassie absolute, frankincense, davana, African bluegrass, myrrh tincture, motia attar, and cinnamon leaf. It is a meditative scent of loneliness and resignation to fate, but one that promotes meditation and strange dreams. 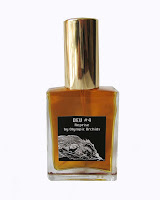 DEV #4: REPRISE
This is the bare-bones version of all the incarnations of Dev, paring them down to their unifying essence and clearing the way for the labdanum to shine through. It’s the scent of coming back full circle to where one started, but with new eyes, as if the world had been tumbled smooth and worn down by events to reveal the clear, shining gemstone at its center. It is the scent of transcendence and triumph after great loss, the calm vision that comes after having weathered a disaster. It contains clear labdanum absolute, tolu balsam, dark labdanum, a pinch of woody base notes, a little bit of frankincense, and the tiniest bit of giant arborvitae as a top note. It is a simple reprise of the original theme, stripped down to its soul, with no more illusions. It is the aura of readiness to move on to a new and higher level in the infinite spiral of life.