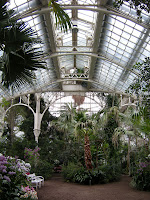 I spent the weekend at an orchid show and sale in a small town in the southern part of Washington State. While the rest of the US is cooking in record heat, we are currently suffering the usual midsummer doldrums of weather that’s neither hot nor cold, just clammy and mostly cloudy. Usually on the 5th of July the sun comes out and stays out until September, but that’s still a few days off.

The orchid show was held in a commercial greenhouse. On Saturday, the sun was shining part of the time, warming the greenhouse up to at least 80-85 degrees F (28-30C). It was surprising how quickly things warmed up once the sun started shining in. It was a perfect demonstration of the “greenhouse effect” on a relatively small scale. Of course as soon as the space got warm, everyone started whining about the heat. I was perfectly comfortable after stripping down to my tank top, but everyone else insisted on keeping their long-sleeved t-shirts and fleece hoodies on, sweating, and complaining about how hot they were.

People in the Pacific Northwest wear fleece jackets or hoodies year-round as a sort of uniform.  I’ve come to do so, too, usually as a middle layer that can be removed if it’s warm (seldom), or added to with a leather jacket if it’s cold (often). It’s a practical way to deal with the unpredictable weather, but a lot of people don’t seem to realize that the fleece is removable.

Saturday night I stayed at a cheap motel. The room smelled like it had never been aired out, retaining the smell of years worth of steamy showers and the resulting odor of dirty hair and mildew. I will have to say that it wasn’t as bad as the smell of years worth of cigarette smoking in the old days, before non-smoking rooms. Every hotel or motel room has its own characteristic odor, some worse than others. A lot of them reek of cleaning supplies, some almost to the point of being intolerable. In the US and Europe, the cleaning odors are caustic and vaguely synthetic-citrus, and can be practically asphyxiating. I remember once staying in a hotel near the airport in Madrid where the cleaning supply smell was so bad that I picked a lot of lavender and rosemary from a flower bed outside and slept with it under my nose to mask the odor of the room. In the old DDR and other Soviet bloc countries, everything smelled of a certain type of phenolic disinfectant – I still think of that as the smell of communism.

The other thing I noticed at the motel was that the air conditioning unit in the room next door was running all night long, making noise. The temperature outside was about 68F (22C), so I don’t know whether the people were heating or cooling the room. It could have gone either way. My guess is that they were cooling it, given that the restaurant where we ate on Saturday evening was significantly colder inside than the temperature outside. I’m always puzzled by the practice, common in the Pacific Northwest, of using air conditioning when the temperature outside is in a comfortable range. There’s something that’s just not right about having to bundle up in cold-weather gear when shopping in a supermarket or eating in a restaurant. The most ironic thing of all is that the production of energy to run all of the air conditioners in the US must be generating a huge amount of CO2, which contributes to the greenhouse effect and global warming, which causes people to run their air conditioners even more … a vicious cycle if ever there was one. 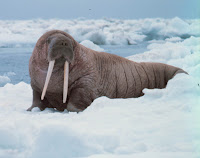 It’s my understanding that humans first evolved somewhere in Africa, where the temperature is warm to hot. Speaking for myself, I’m pretty sure my remote ancestors were closer to monkeys swinging in a jungle than walruses sitting on an iceberg, so I like to be warm enough to go barefoot and take off my fleece jacket. I now seem to be in the minority, since most people like to be much cooler than I do, and I can’t help wondering if humans are evolving in a way that is causing them to lose the ability to temperature-regulate when it’s warm.

[All photos from Wikimedia]
Posted by Doc Elly at 8:32 AM