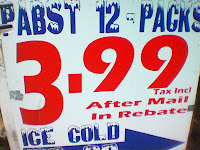 Our capitalist society has come up with some pretty stupid ideas, and somewhere near the top of the list is the mail-in rebate. Can you imagine sending off for a rebate on a 12-pack of bad beer? I thought mail-in rebates had gone out of fashion, but apparently they’ve just taken on a new form. I recently bought a new phone from T-Mobile. The price of the phone was $99.99 (of course it couldn’t be an even 100.00, because that sounds like SO much more than 99.99).  The phone came with a $50 mail-in rebate form, which I dutifully completed and spent 45 cents mailing to some dreary corporate hive full of drones, where it took about a month to process. Maybe the paperwork had to go to India and back – who knows? 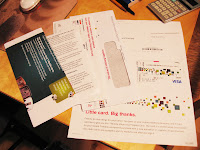 Just when I’d forgotten about the whole rebate thing, an envelope appeared in my mailbox, probably having cost another 20 cents or so in postage, given that they used “presorted first class mail” rates. I have no idea how much the labor of the drones who processed my rebate cost, but let’s say that they were working for minimum wage, which is $7.25 per hour, and spent a total of 5 minutes on the matter. That would have cost the rebate-processing people 60 cents. The envelope was printed in color, with a custom design. Bought or produced in extreme bulk, these probably cost less than a penny, as did each of the three color-printed advertising and “informational” inserts that were in the envelope, but they do use a good bit of paper. Along with the inserts was another piece of custom-color-printed paper with a plastic debit card attached. According to my research, these cards cost about 12 cents each if bought in bulk. Let’s say all of the paper and plastic together cost about 15 cents. Not very much in terms of money, but a huge waste of resources and the time it took to design, print, and assemble it all. Even if it was all done by a machine, the machine had to be designed, programmed and tended by humans. My data had to be input, since my name is on the card. Let’s say another 5 minutes of collective drone time at 60 cents. 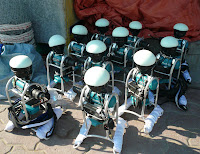 The back of the sheet to which the card is attached is covered with the smallest and poorest quality print I’ve ever seen. Obviously the designer hoped that it would not be read. The card was not issued by T-Mobile, but by “CTI Prepaid Services”. There was a fee schedule at the end of the small print that mentioned an “account maintenance fee” of $3.00 per month. Huh? I hadn’t asked for an account, and I certainly had no intention of maintaining one. Suspecting some sort of card scam, I phoned the “help” number on the insert. I was transferred from one robotic voice to another, with no indication that there were any humans connected with the number. I always scream curses and obscenities at phone robots, hoping that the call will be recorded and a human will eventually hear the unsatisfactory conversation.  I suppose that’s wishful thinking and my curses echo in an empty virtual space. In any case, after going around in circles with the robots, they told me that they couldn’t understand what I wanted and to try the call again later. Again, someone had to buy an automatic phone system and program it. According to one website, these systems start at about $25,000. I have no idea how to calculate the cost of my interacting with this system for 10 minutes, but let’s call it $1.00.

In frustration I phoned the local T-Mobile store, where I talked to a real human for about 5 minutes. I hope T-Mobile pays more than minimum wage, but let’s assume the worst and just say that’s another 60 cents spent on my rebate.

The very nice woman on the phone assured me that I would not be charged any fees, and that I could use the card at any store that took Visa. I asked about canceling it, but it seems that there’s no way to make sure that the card is defunct, given that humans don’t administer it. Supposedly it just “cancels itself” after the money is unloaded from it. Interesting. Cynic that I am, somehow I think the fine print is trying to tell me that it won’t be canceled and that they’ll try to charge me for not using it after the initial transaction.

Tomorrow I’ll try to go out and buy some groceries with the card, but what a lot of trouble and wasted resources! Adding up the estimated cost of processing this rebate, it comes to about $3.50, and that’s probably very conservative. It would have been so much simpler to just credit my T-Mobile account with $50. Or, for an even more radical idea, how about selling the phones for $49.99 and eliminating the whole rebate nonsense?

I suppose rebate processing is one of those useless industries that the printers, phone robot companies, and credit card manufacturing companies make money from, but it actually makes me angry to think that resources and human time are used in this frivolous way. Probably the rationale is that most people are too busy or lazy to fill out the paperwork and send it off, and end up paying full price, or else they end up charging a lot of stuff to the card and incurring massive fees. Whatever scenario you envision, it’s a complete waste, and it makes me think about how many other utterly useless industries exist, all feeding off each other and making everything more complicated than it needs to be.

Rant over. Time to go to the grocery store.

[Beer rebate and robot army photos from Wikimedia]
Posted by Doc Elly at 10:49 AM