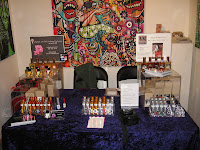 So now comes the big day. Our rolling suitcases have been emptied of clothing and personal effects, and filled with perfume bottles and display items. After a cup of the bad coffee that’s provided in the hotel lobby, we set off through the gray, cold morning, pulling our suitcases behind us. Once we arrive at the Gallery 4N5, we are told that we cannot get in at 9:00 as they had said the previous evening, but have to wait until 9:30, after they get the tables set up. I wait with the suitcases and have another bad cup of coffee at Denny’s while Michael goes back to the hotel to get something important that we had forgotten – I can’t even remember what it was now.

Each exhibitor got a small table in an alcove, with paintings on three sides. The colorful paintings at my booth fit nicely with the Devil Scents theme, since they looked like the tortured, screaming creatures in the Quantum Demonology version of hell. With two people, setup went fairly quickly, but there was a lot of fussing around initially trying to decide how to configure the table. We ended up with the regular line on one side and the Devil Scents on the other. The clear acrylic stands to elevate bottles and signs worked well. 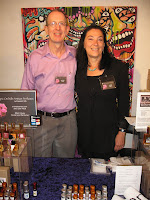 Then the public started pouring in. Everyone wanted to smell as many things as possible, so Michael and I were scrambling to talk to people, give them tester strips, and even occasionally make sales. The Square device for scanning credit cards into a phone worked flawlessly. Michael had undergone a crash sniffing course the night before, and with cheat sheet in hand, he did a fabulous job talking about all of the different fragrances and pushing his personal favorites, Red Cattleya, Javanica, A Midsummer Day’s Dream, and Kingston Ferry. I don’t think we had a free minute until sometime late in the afternoon when I started to feel as if I was being asphyxiated by all of the perfume floating around the gallery and had to step outside for a minute to breathe some fresh air.

At the end of the day, people had taken lots of sprayed strips in baggies, they’d sprayed themselves liberally with Devil Scents and other things, they’d bought a lot of small spray bottles, and they’d ordered some things that I hadn’t brought to the show. Very few large bottles were sold. Over the course of the day, I realized that if I’d brought sample packs, everyone would have bought them.  After all, the event was all about sampling, not buying a single perfume. Lesson Number Two: Don’t bring a lot of big bottles. People are there to try things out, not buy a bottle of “signature scent”, so nice sample packs are the way to go.

As we were packing up, I tried to make the rounds of other perfumers’ booths, and took a few photos. There was rumored to be free champagne at the bar, but by the time I got there it was gone, if it had ever been there at all.

Here are some more photos to help put names with faces. 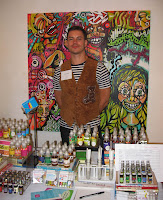 Here's Brent Leonesio of Smell Bent at his booth. It's interesting that he got paintings by the same artist we did. They really fit his look, too. I now realize that I didn't have time to even look and see who the artist was! 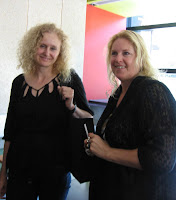 Here are Ineke Ruhland (Ineke perfumes) and Danielle Sergent of Cognoscenti Perfumes. The photo was actually taken at the breakfast on Saturday, but it's included here in the names-to-faces parade. 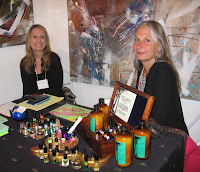 Here is Leila Castle (Leila Castle Botanical Perfume) with her daughter, who was helping her at her booth.