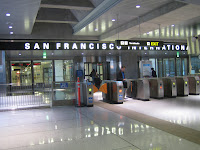 After an intense day on Sunday, both Michael and I were ready for some relaxation. Fortunately we had planned a vacation day into the schedule, but first I had to pack up the leftover items from the show and ship them back to Seattle. Lesson Number 3: If you know you’ll have to ship stuff back from a show, pack a small roll of tape and pre-printed address labels to go on the boxes. We had to start our morning with a trip to the Market Street Walgreen’s to get tape. You might think a hotel would have some basic packing supplies, but they did not, nor had they ever heard of FedEx. We ended up taking the boxes by taxi to the nearest FedEx office after finding the address online, and the whole thing was still much cheaper than checking two bags.

Free at last, we hopped on the BART and headed for Berkeley, where it was likely to be warm and sunny. It was. We first went to visit the Musical Offering Café, which combines a classical CD shop in back with a café in front. Michael’s brother managed it for years when he lived in Berkeley, and the same owner was still there. She and Michael reminisced a lot and talked about the future of classical music, classical CDs, and CDs in general.

We then went walkabout, enjoying the blue sky, sun, and just being in a beautiful part of the world. As we walked past the Gelateria Naia, I felt something calling my name. Being lactose-intolerant, I don’t usually eat ice cream, and I don’t even like the taste of the sticky sludge put out by most US ice cream makers, but I somehow had a quivering feeling that there might be something here for me.

And was there ever. The case was full of the most enticing array of sorbetto ever, and even the gelato seemed much less milky and sticky than usual. They were happy to provide tastes of anything and everything, and my only regret is not having tasted everything in the store. My first taste was Earl Grey gelato.  It was a wonderful mix of tea and bergamot, just as aromatic as a cup of really good Earl Grey tea, but velvety and cold. Michael the ice cream lover was immediately infatuated with it and ended up with a big dish of the stuff. I went on to taste the rose gelato. That’s right, a floral ice cream in the US. The last time I had anything of the sort was in India. It was true to the flower fragrance, and I’m sure it was made with real rosewater. The aroma was wonderful, but it was a little too creamy for my taste, and I wished it had been a sorbetto. Next up was mojito sorbetto. That was it!! Fresh mint, lime, and no milk anywhere in sight. I ordered a big scoop of mojito on a sugar cone, and had it topped off with a tiny dollop of rose.

That cone was the best thing I’ve had since I was in Florence, where I had fig and plum sorbetto, both of which were available at Naia, too, along with things like mango, cranberry, watermelon, and even prickly pear! Delicious.

I really love sorbetto made with odd things. I don’t mean odd in the sense of “oreo cookies”, which is just disgusting, but odd in the sense of using perfumey materials or spices as flavorings. Two of of my favorite surprises were having thyme sorbetto in Spain, and the rose gelato and mojito sorbetto in Berkeley. Other good flavors would be lavender, sage, saffron (popular in India), rosemary, violet, ginger, basil, oregano, orange flower, cardamom, and lemongrass. Going way out there, how about labdanum, musk, or wasabi?

We have had an ice-cream making apparatus languishing in a storage closet for many years, given to us as a gift, and I’m halfway tempted to haul it out and start experimenting with sorbetto flavors. If the weather ever warms up this summer, it will be tempting.

After the gelateria experience, we walked about some more, eventually ending up at a local microbrewery for dinner. Then, as we were about to go back to the BART, Michael decided we should check out a game store that we passed on the way. After browsing a bit, he became fascinated by the go players at tables in the middle of the room. One of the players offered to teach him the game, so he sat down, but fairly quickly got tired of it and sat me down in his place. That’s how I learned to play go from Professor Herb Doughty, the president of the Berkeley Go Club, who has been playing every day for the past 50 years and is a master of the game. I’m not big on playing board games, but it was kind of fun, and I now know the basics if anyone ever challenges me to a game of go.

You never know what you’ll encounter on a walkabout.

[Photos from Wikimedia]
Posted by Doc Elly at 11:03 AM